Back to all posts

He was on a plaque outside the Danville courthouse. That was the first I heard of him. The usual bronze recitation that leaves little impression:  native son, born 18-something, lawyer, etc. Another politician, I figured. But then some words that did make an impression:

On Fame's eternal camping-ground
Their silent tents are spread,
And Glory guards, with solemn round,
The bivouac of the dead.

The man was a poet.  A dark-minded, brooding one at that.  Personified glory was Victorian boilerplate, but that landscape of silent tents and the reverberation of the title line—they were original and stuck in my head.
Later at the mass grave at Perryville Battlefield I saw those words again.  Then, as the years passed, also at Antietam, Gettysburg, Arlington, and Normandy.  O’Hara followed me around.  The other four lines of the bivouac stanza were usually included in these death-field inscriptions.  They added the snare roll fading in the air, the sound-track of the eerie camp scene:

The muffled drum's sad roll has beat
The soldier's last tattoo.
No more on Life's parade shall meet
That brave and fallen few.

“Tattoo” in that older sense is such a fine word. The evening drum.  Return to quarters.
Most poems are written on paper.  “The Bivouac of the Dead” is written in stone.  And iron.  On cemetery gates and monuments from Washington to Guadalcanal to the Crimea, it’s the big daddy of military graveyard poems.  The most lapidary American elegy.
Now it’s written in a song.  I just got it in my mind that it should be molded into a folk song and that I was the one for the job.  O’Hara and I both liked charged language, graveyard walks, and the nineteenth century.  I was writing all these songs set in his world anyway.  We shared a town and a state.  The “stout old chieftain” of “Bivouac," Zachary Taylor, was even a kinsman of mine.  O’Hara had been following me around for a reason.  A co-write. I had thought the album was finished, but there was this one last song to do.  Not because it could tap any imaginable listening trend—it’s insane from that point of view—but just because I had this strange compulsion.
As I began to hammer on the whole 12-stanza elegy for my three-minute lyric, O’Hara surprised me.  History says the man was no pacifist.  He was a gung-ho recruiter and officer for the U.S. Army in the Mexican War, the Confederate Army in the Civil War, and a mercenary army that tried to conquer Cuba.  War, as his famous poem renders it, is full of valor. Yet. It's also filled with anguish. Adrenaline-driven warriors gash each others’ flesh. Birds of prey hover over the decomposing slain. Haughty flags become trampled shrouds. Generals sacrifice rivers of gore from one generation after another. Honor and glory may be the headlines, but carnage, sorrow, and silence are the details. “Bivouac” has shadow as well as light is what I’m saying, and is richer for it.
O’Hara was no armchair soldier. He knew what it was to breathe the cannon smoke and ram a minie ball home. Was just back from the Mexican War when he wrote the poem in 1847. Had been wounded a few months earlier at the Battle of Churubusco. Wrote the poem when he heard about the devastating losses and battle-turning heroism of the Kentucky Second Infantry at Buena Vista. He understood all sides of war. Thus, amidst the abstraction-wielding grandiloquence, the touches of realism that give his war-poem grit.
I kept the grit in the foreground of our co-write.  O'Hara raised no objections. 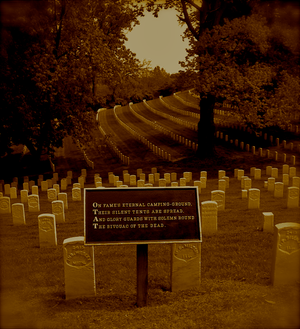 Here’s the whole poem as the man wrote it:

No more on Life's parade shall meet

That brave and fallen few.

Their silent tents are spread,

And Glory guards, with solemn round,

The bivouac of the dead.

No rumor of the foe's advance

Now swells upon the wind;

No troubled thought at midnight haunts

Of loved ones left behind;

No vision of the morrow's strife

No braying horn nor screaming fife

At dawn shall call to arms.

Their shivered swords are red with rust;

Their plumèd heads are bowed;

Their haughty banner, trailed in dust,

Is now their martial shroud.

And plenteous funeral tears have washed

The red stains from each brow,

And the proud forms, by battle gashed,

Are free from anguish now.

The neighing troop, the flashing blade,

The charge, the dreadful cannonade,

The din and shout, are past;

Shall thrill with fierce delight

Those breasts that nevermore may feel

The rapture of the fight.

That sweeps his great plateau,

Flushed with the triumph yet to gain,

Came down the serried foe.

Who heard the thunder of the fray

Break o'er the field beneath,

Knew well the watchword of that day

Was "Victory or Death."

Long had the doubtful conflict raged

O'er all that stricken plain,

For never fiercer fight had waged

The vengeful blood of Spain;

And still the storm of battle blew,

Such odds his strength could bide.

'T was in that hour his stern command

Called to a martyr's grave

The flower of his belovèd land,

The nation's flag to save.

By rivers of their fathers' gore

And well he deemed the sons would pour

Their lives for glory too.

Full many a norther's breath has swept

And long the pitying sky has wept

Above its mouldered slain.

The raven's scream or eagle's flight,

That frowned o'er that dread fray.

Sons of the dark and bloody ground,

Ye must not slumber there,

Where stranger steps and tongues resound

Along the heedless air.

Your own proud land's heroic soil

Shall be your fitter grave;

She claims from war his richest spoil--

The ashes of her brave.

Far from the glory field,

Borne to a Spartan mother's breast

On many a bloody shield;

The sunshine of their native sky

Smiles sadly on them here,

And kindred eyes and hearts watch by

Rest on, embalmed and sainted dead!

Dear as the blood ye gave;

No impious footstep here shall tread

The herbage of your grave;

Nor shall your story be forgot,

While Fame her record keeps,

Or Honor points the hallowed spot

In deathless song shall tell,

When many a vanished age hath flown,

The story how ye fell;

Nor wreck, nor change, nor winter's blight,

Shall dim one ray of glory's light

That gilds your deathless tomb.